In ‘The Frayed Atlantic Edge’ (William Collins, July 2019) historian and experienced sea-kayaker David Gange recounts his journey along the Atlantic coasts of Britain and Ireland, from Shetland to the Channel. In travelling by kayak, Gange immersed himself in the rhythms of the sea and coast and sought to gain new perspectives on the history and geographies of Britain and Ireland, from the perspective of the sea. Drawing on archival and literary sources, he weaves together an account of these Atlantic coasts which challenges head-on dominant narratives of the peripherality and marginality of coastal and island places. He begins with the conviction that British and Irish histories ‘are usually written inside out’, based on the false premise that the ‘land-bound geographies’ of today have existed forever (p. ix). 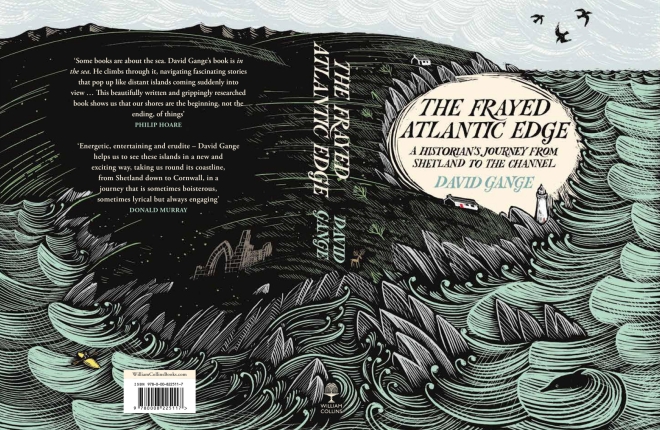 END_OF_DOCUMENT_TOKEN_TO_BE_REPLACED

The fiftieth anniversary Conference of Irish Geographers, took place at Maynooth University, (close to Dublin, in County Kildare) from 10-12thMay 2018. In response to a call for papers for a themed session with the title: Between Nature and Culture, Land and Sea: Spatial Practices at the Coast, Ruth Brennan (Centre for Environmental Humanities, Trinity College Dublin) and I convened a double session with eight papers[1]presented to a lively audience on the last day of the conference. We were particularly interested in papers which viewed coasts and coastlines as boundary spaces and explored ways in which natural and cultural values are contested and negotiated at the coast. With this thematic focus, the session built on recent work on cultural geographies of coastal change (e.g. Walsh & Döring 2018) and was informed by a broader concern to bring together perspectives from cultural geography and the environmental humanities.

The first paper, by Frances Rylands and colleagues from the interdisciplinary Cultural Values of Coastlines project at University College Dublin explored the concept of emotional ecologies as a means of incorporating cultural values in policy-making at the coast. Her paper addressed the question of how nature-culture relations can be narrated at the coast, working with through practices of story-telling and story-mapping. Drawing on the Lorimer’s Wildlife in the Anthropocene (2015), she spoke of the non-human charisma of seals and their role as digital personalities in the communication of particular images of nature at the coast. Her paper highlighted the importance of developing and articulating an ethic of care in relation to the marine environment and the potential role of story-telling in articulating otherwise intangible and difficult to grasp emotional responses and cultural values.

END_OF_DOCUMENT_TOKEN_TO_BE_REPLACED

The current proposals regarding the introduction of a planning regulator in Ireland have the potential, as Gavin Daly suggests to insert a much need level of oversight into the Irish planning system which has been missing to date (notwithstanding the signficant role of An Bord Pleanala as a national appeals body). The question of the relationships between the proposed regulator and existing institutional structures are critically important. Perhaps more fundamental, however, are the implications for how we understand the role of local and regional democracy with regard to planning in Ireland. Given past experience, it is perhaps unsurprising that there is a tendency to move a away from a local democratic model of planning to a more hierarchical, technocratic one, but it is important that both the positive and negative aspects of this shift in approach are fully considered. See the comments from Cllr Dermot Lacey on this issue here. The possibility for Regional Authorities to have a role in determining key aspects of spatial strategies at this regional level would seem to me to be worth maintaining and enhancing. A key element here is ensuring buy-in from the local and regional levels of governance. Maybe, an explicit acknowledgment and recognition of the contested and political nature of spatial planning is also needed? It may be helpful to consider the reasons why Northern Ireland is putting in place a major process of reform to decentralise planning powers and competences from the national/regional level to the local level.

Yesterday, Minister Jan O’Sullivan appeared before the Oireachtas Joint Committee on the Environment, Culture and the Gaeltacht to outline her Department’s proposals to legislate for the introduction of a Planning Regulator in 2013. The introduction of an Independent Planning Regulator was a key recommendation of the Mahon Tribunal Report published last year. The Tribunal recommended that the Minister for the Environment’s planning policy enforcement powers be transferred to an Independent Planning Regulator who should also be charged with carrying out investigations into systemic problems in the planning system as well as educational and research functions.

The introduction of an independent Planning Regulator, which the Minister has publicly committed to, does not entail a simple ‘bolt-on’ addition to the planning system. It will profoundly alter and transform the entire way in which planning policy has to-date been implemented in Ireland. It is clear from the text of the Minister’s speech that…

The following abstract was submitted yesterday to the AESOP/ACSP Conference at University College Dublin, which will take place in July:

Creating a Space for Cooperation: Soft spaces, spatial planning and territorial cooperation on the Island of Ireland

Cross-border and multi-jurisdictional institutional contexts present particular challenges for spatial planning and add to the complexity of spatial planning tasks (see Weith 2012). Given the constraints of working beyond the territorial boundaries of a nation-state, processes of spatial planning in transnational contexts often work with soft instruments and a tentative, politically sensitive approach to the representation of cross-border spaces in policy documents (Faludi 2010). This paper demonstrates that spatial strategy-making can, however, play a key role in the process of shaping and reshaping the spatial imaginaries underlying public-policy and thus the framing of government responses to the challenges and opportunities of cross-border cooperation.

This paper examines the role of soft spaces of cross-border cooperation and spatial planning in evolving processes of spatial governance on and for the island of Ireland.  The concept of soft spaces refers to non-statutory spatialities. They are specific social constructions of space which lie outside the political-administrative boundaries and internal territorial divisions of the nation-state (Allmendinger & Haughton 2010). Processes of strategic spatial planning, working through soft spaces at multiple scales have played a significant role in the renegotiation of the spatial relationship between Northern Ireland and the Republic of Ireland in the period of relative political stability since the cessation of armed conflict in Northern Ireland in the 1990s (Murray 2004). Drawing on the analysis of qualitative interview data and policy documentation, the paper will examine the role of spatial planning in reconfiguring territorial spatial imaginaries and developing a new policy vocabulary of functional and relational geographies. The paper also highlights the complexity of the spatial governance arrangements in this cross-border context and reflects on the implications of a continued dominance of territorialism among local scale actors (see also Walsh 2012).

The paper will hopefully be presented under Track 10: International Planning, Cross-border and Inter-regional Cooperation, chaired by Andreas Faludi (Delft) and Neema Kudva (Cornell).

The paper draws on case study research conducted under the Soft Spaces, Spatial Planning and Territorial Management in Europe research project, led by Joerg Knieling and Frank Othengrafen at HCU Hamburg. It also, however, builds on previous work conceptual and applied research work conducted at UCD, NIRSA and for ICLRD.

This paper, written in summer 2011 for Pleanail, the journal of the Irish Planning Institute (one of two professional associations for planners in the Republic of Ireland discusses the role of academic and applied research in supporting spatial planning in Ireland. It was published in November 2012. It focuses in particular on the applied spatial planning work of the National Institute of Regional and Spatial Analysis  (NIRSA, where Prof. Rob Kitchin is Director) and the related All-Island Research Observatory (AIRO) and International Centre for Local and Regional Development (ICLRD). AIRO plays a key role in making spatial data and publicly available on a comparable all-ireland basis. The ICLRD conducts policy and practice oriented research and training focussed on the cross-border region of Ireland/ Northern Ireland. At the European level, NIRSA contributes to the further development of evidence-informed spatial policy through its role as  ESPON Contact Point for Ireland and as a partner in ESPON projects.

The Irish Planning Institute has recently highlighted the need for ‘coordinated and comprehensive research on planning and development matters at a national level’ to support evidence–based planning in Ireland (President’s address, Autumn Conference 2010). New legislative requirements and a rapidly changing planning and development environment have served to highlight the need for a robust evidence and research base to support decision-making and monitoring at local, regional and national levels. The National Institute for Regional and Spatial Analysis (NIRSA) has since its foundation played an active role in articulating and implementing an applied research agenda for spatial planning in Ireland providing tools, analysis and research support on a wide range of issues. The recently launched All-Island Research Observatory (AIRO) provides a freely available spatial data portal where key statistics, indicators and mapping can be easily accessed in a user friendly manner. The International Centre for Local and Regional Development (ICLRD), of which NIRSA is a founding partner, is very active, working at the interface between research, policy and practice with a particular focus on issues of North-South cross-border cooperation through spatial planning. Through participation in the ESPON programme, NIRSA is active in disseminating research findings and policy implications at a European level and translating them to an Irish context. This paper provides a research perspective on some of the key challenges and opportunities associated with the further development of an evidence-informed approach to spatial planning policy and practice in Ireland. In particular, experience in NIRSA points to the positive benefits of a dynamic interactive relationship between research, policy and practice, which is well positioned to respond to a rapidly changing economic, planning and policy environment.

News from the Regional Studies Assocciation

News from AESOP: Association of European Schools of Planning