The Wadden Sea constitutes an inter-tidal coastal landscape, reaching from Den Helder in the Netherlands, along the German North Sea coast to Blavands Huk in southwestern Denmark. This coastal landscape has been shaped over a period of a thousand years or more by dyke-building, land reclamation and drainage practices as well as periodic storm flood events producing a material and symbolically powerful boundary between the land and the sea. Today the inter-tidal landscape in front of the dykes is recognised as a unique, ecologically rich and diverse ecosystem of outstanding natural value with the status of a UNESCO World Heritage site. The status of the Wadden Sea as a natural landscape is nevertheless contested, particularly among the coastal communities for whom this coastal landscape is their home-place or Heimat (Walsh 2017).

The tidal landscape of the Wadden Sea coast has been argued to present a ‘mental provocation’, challenging the image of a clear and secure line of separation between land and sea, constitutive for modern scientific and administrative understandings of the ‘coast’ (Fischer, L. 2011). The Wadden Sea presents a challenge to this – literally – linear understanding of the coast in two senses: firstly the fluctuation and fluidity of the barrier between land and sea is prominently visible through the extensive diurnal tidal range, characteristic of this low-lying coast. Secondly, the historical record documents substantial shift in the physical location of the coastline as the consequence of catastrophic storm events, processes of erosion and sedimentation as well as practices of land reclamation. Since the construction of the first dykes in the twelfth century, the boundary between the land and the sea has been progressively pushed westward through extensive dyke-building and land reclamation (Krauß 2005). The history of the coastal landscape is also marked by catastrophic storm-flood events, which resulted in extensive loss of life, land and livelihoods. A storm-flood, recorded to have occurred on the 16th of January 1362 led to the loss of Rungholt in Northern Friesland, an important regional trading centre of time. Similarly engrained in the historical memory of the region is a storm flood event in 1634, which claimed almost 10,000 lives and the island of Strand (Quedens 2010). In Eastern Friesland, the village of Itzendorf was lost to the ‘Christmas Flood’ of 1717. In more recent times, a storm surge in February 1962 brought extensive damage along the North Sea coast and tested the existing system of dykes to their limits and beyond in a number of cases.

Map of Eastern Friesland showing the lost village of Itzendorf, northwest of the town of Norden, by Ubbo Emmius (dated 1595).

Fischer’s mental provocation points to challenges posed by the material, physical geography of the Wadden Sea to the modern, supposedly mutually exclusive categories of land and sea and the related understanding of coasts as linear, boundary features demarcating the edge of the land. The modern narrative of controlling and subduing nature, implicit in contemporary coastal engineering practices displaced historical narratives of passive acceptance which were found to be reflected in the mindsets of Hallig-islanders[i] into the twentieth century. Indeed, the spatial concept of a singular and continuous coastline and the associated perception of a sharp division of cultural and natural landscapes, dominant along the German Wadden Sea coast may be traced to culturally-embedded material spatial practices of dyke-building and coastal protection (Fischer 2011, 33-36). For social anthropologist Norbert Fischer (2007) dykes at the North Sea coast have constituted highly complex landscape boundaries, “symbolically representing patterns of spatial, cultural and social organisation of coastal communities at the North Sea” (ibid.). From the early modern period, the dykes separated the cultivated and highly fertile lands behind the dyke from the inferior, marginalised lands beyond the dykes and thus produced a spatial separation of ‘civilisation’ and ‘wilderness’ at the coast. Ludwig Fischer (2011) relates that the maxim that ‘one does not build beyond the dyke’ continues to hold sway today even at locations which are, in fact, protected from coastal flooding. This illustrates the extent to which specific socio-spatial meanings have become internalised and are constructed as ‘social certainties’ among the coastal communities at the Wadden Sea coast (2011, 31-32).

Coastal protection, land reclamation and the drainage of lands behind the dykes required the local landowners to work together on a collective, organised basis. As a consequence, dyke and drainage associations constituted powerful institutions of self-organisation through which rural coastal communities gained a degree of autonomy from the then centres of economic and political power (Allemeyer 2006, 14). This tradition of localised self-organisation has further become associated with a reinvented and idealised interpretation of Frisian agricultural society and cultural identity (Krauß 2005). In the following citation, a former dyke judge of the Krummhörn in Eastern Friesland refers to the proud tradition of the dyke associations in terms of a constant struggle to control the forces of nature:

… the water, besides all other factors has an unrelenting influence on our landscape. One thinks of the storm-floods, the powerful forces in the transition zone between land and sea. Man … often stands quite helpless against these forces… Nature tirelessly creates changes. Man constantly seeks to gain control… That what has been accomplished and continues to be accomplished here by dyke and drainage associations is an achievement which the East Frisians can, without hubris, be proud of (Ohling, 1963, 11).

Detailed chronicles produced by the Krummhörn and Mömmerland dyke associations (both Eastern Friesland), for example, trace the lineage of dyke and drainage association structures and the names of the local dyke judges from the 1500s to the present day, testimony to a proud tradition of collective struggle against the sea (e.g. Wilken 2003). These chronicles frame the contemporary work of the dyke associations as a material practice embedded in the cultural history of the landscape and formative in the identity of the region. Although in the contemporary context, the state takes responsibility for financing coastal defence infrastructures, the role and independent status of the dyke associations in Lower Saxony in the care and maintenance of the dykes is guaranteed by law, ensuring a strong degree of continuity into the present era. The role of the dykes in protecting lives, land and livelihoods, is encapsulated today in the following motif, common to many dyke associations: ‘No dyke, no land, no life’, and attributed to the 18th Century dyke judge Albert Brahms, stressing the essential role of the dykes to life at the coast, but also reflecting the original primary purpose of the dykes in a desire to protect agricultural land from storm-floods so as to ensure greater productivity (Kramer, 1989).

The Wadden Sea dykes are arguably integral to the structuring of socio-spatial relations at the coast with distinct cultural meanings attached to the lands and sea areas behind and beyond and the dykes. The dykes constitute both a material and symbolic boundary separating the natural landscape of the Wadden Sea from the cultural landscape behind the dykes. In this sense, the practice of dyke-building may be understood as a boundary-drawing process whereby the discursive categories of civilization /wilderness and cultural / natural landscape are relationally constructed as binary dualisms through the socio-material construction of spatial boundaries. The dykes represent elements of durability, fixity and stability in the socio-material construction of place and landscape at the coast, while at the same time providing a powerful reminder of the capacity for coastal landowners, and in more recent times, regional or state agencies, to dramatically alter, control and subdue the landscape.

Today this binary categorization is reflected in practices of nature conservation at the German Wadden Sea coast, where a sharp distinction has been drawn between the natural landscape worthy of protection beyond the dykes and the cultural landscape behind the dykes. This reading of the landscape continues, however, to be contested from within the local coastal communities on the mainland and islands. At the height of the local opposition to the Schleswig-Holstein Wadden Sea National Park in the 1990s, protestors claimed that ‘God created the sea, the Frisians the coast’. For many, the Wadden Sea continues to represent a ‘manmade land’ that is presented or construed as ‘pure nature’ and designated as a National Park and World Heritage site. 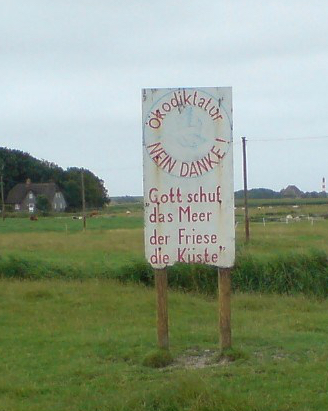 Eco-dictatorship: No Thanks! “God created the Sea, the Frisians the Coast”, protest sign in Northern Friesland. (c) Jürgen Thesing.

[i] Halligs (also known as holms) are small low-lying, often inhabited islands within the Wadden Sea, subject to seasonal flooding.

News from the Regional Studies Assocciation

News from AESOP: Association of European Schools of Planning